As part of the Council of Europe’s “No hate speech” campaign against online hate speech, we organised a training day on this subject on May the 29th and 30th at Lieu d’Europe. 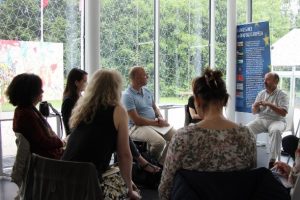 The day began with a speech by the Deputy Mayor’s representative, Clément Dolisi, who presented the “No hate speech” campaign as well as two other upcoming projects: The World Refugee Day held on June the 2nd at Lieu d’Europe and the creation of a participatory budget to support three projects proposed by citizens in line with the values of the campaign. Afterwards, Rui Gomes, representative of the Youth Department at the Council of Europe, mentioned the definition of hate speech while recalling the importance of raising awareness on this subject to make the fight more effectively. After these two interventions, Sonia, representative of AMSED and Agatha, representative of ALDA, each presented their associations, then the schedule, the objectives and activities of the day.

To begin we invited the participants to visit the exhibition at the Lieu d’Europe from a different angle. Indeed, we divided them into small groups and gave each group an article of the European Convention on Human Rights, the aim was to find the Court’s decision to which the article corresponded. At the end, each group presented its solution in order start a first discussion on Human Rights issues. Then we introduced this theme by broadcasting the video of the Council of Europe campaign on hate speech, which first defined what freedom of expression is and what its limits are. This allowed the participants to debate and express themselves on their feelings and on the possible confrontation with hate speech in their daily lives. To show the impact of these social inequalities, we have set up the activity “a step forward”. Each of the participants was assigned a character, then questions were asked by the trainers, and each one had to advance a little, a lot or stay on the spot according to the situation of the character they played.

After a short lunch break, Lydia (AMSED), began the afternoon by introducing the “Roots and Branches” activity in which participants were asked to reflect, as a group, on the causes and effects of hate speech portrayed in the form of a tree. The aim was to understand and analyse hate speech. Therefore, Sonia and Agatha proposed to the participants the activity “From bad to worse”, according to which they had to classify 12 hate speeches on a scale from the most despicable to the least despicable, which once again gave rise to a common exchange, because in some cases the classification criteria differed. One of the main goals of the training was to understand how to respond to hate speech so the trainers explained two possible response models: the counter narrative that tends to directly confront the source of the speech to its words by contradicting it, then there is the alternative narrative that consists in distorting the words of hate speech in order to better contradict them. To do so, they had to choose a speech among those in the ranking and answer it. Finally, each group presented their ideas and explained it. 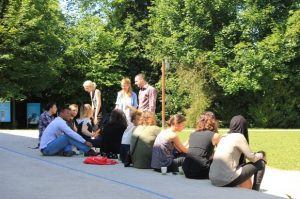 At the end of this training we asked the participants to share their opinions and tell us which activities they preferred. The discussions and the workshop “A step forward” were much appreciated, this workshop was able to show them in a more concrete way the consequences of social inequalities according to different profiles there was a general cohesion and a very good reception of the training by the participants.