Dear friends of the Place of Europe,

After a thwarted spring, summer is finally here! And it brings with it beautiful events which, if they will take place in the respect of the barrier gestures, will be no less festive and convivial and will take place for the most part in the open air. Exhibitions, concerts, children’s shows, activities to be carried out independently: here are some of our proposals to live a European summer, with family or friends… at the Lieu d’Europe.

We hope to see many of you there! 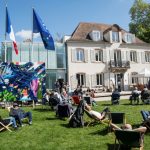 Find every Saturday the Strasbuskers’ concert!

To convince you to join us, here are some excerpts from their rehearsal at the Lieu d’Europe.

Free concert in the Lieu d’Europe park at 5pm! 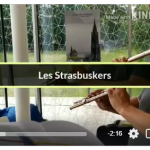 Quiz for the Olympic Day 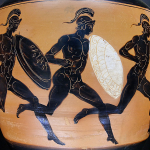 On the occasion of Olympic Day, celebrated every 23rd June since 1948 all over the world, we invite you to take part in a quiz which is offered to you in collaboration with the Sports Department of the City of Strasbourg! On your marks, get set, click ! (before July 5th).

Did you know that the premises of the European Parliament were named after eminent European personalities?

While the Louise Weiss building is the main entrance to the institution, few people know that its neighbour, connected by the footbridge over the Ill, is called Salvador de Madariaga. A pacifist of the shadows, the Spaniard joined the League of Nations, the forerunner of the United Nations, in 1921, where he headed the “Disarmament” section. Exiled abroad during the Franco dictatorship, he campaigned for the European cause from the 1930s onwards before chairing the Cultural Commission of the Congress of The Hague, which led to the creation of the Council of Europe.

Built in the 1980s, the building that bears his name now houses the European Parliament and the European Ombudsman. 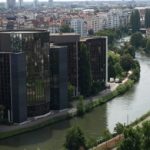 On the European stage, the Strasbourg theatre of Le Maillon offers two shows for children:

The first is a residence outing.  Find out more about it.

Survey of the Strasbourg Philharmonic Choir

The Choeur Philharmonique de Strasbourg has launched an international survey which brings together the testimonies of some sixty choirs affected by the health crisis, ready to share their initiatives, their findings and their failures. The responses came from all continents and are as many illustrations of choral practice throughout the world.

The Greek chairmanship of the Committee of Ministers of the Council of Europe continues!!

Don’t forget to visit the page dedicated to the Greek Chairmanship, whose contents are regularly updated. This month, a virtual exhibition entitled The Children of Ritsona, published on the occasion of World Refugee Day, will be on display. Visit.

Cross-border cooperation in the age of COVID

The Mission Opérationnelle Transfrontalière publishes a report that takes stock of the impacts of the COVID-19 crisis on cross-border cooperation. Find it Here.

Public operator, association or NGO, you participate in twinning projects between cities or contribute to the animation of a network of cities? Do not hesitate to apply for the call for projects of the Europe for Citizens programme! Apply