May has a special meaning in the European construction history. That was the occasion to celebrate the citizen and democratic Europe through days of activities on cultural, democratic and citizen themes. Let us return together to the last few weeks during which, together, we have reinvented Europe!

The celebrations started on May 5th with Erasmus Day. We organized a committed stroll in the city, during which we introduced AMSED and Erasmus+. We have 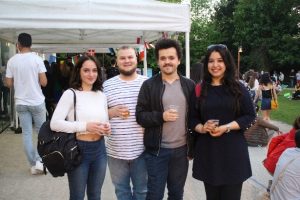 been at Place Kléber and Place Saint-Etienne to encourage young people to answer our questionnary and invite them to the party organized by the ESN (Erasmus Student Network). So, we met at the Lieu d’Europe for the party where we could taste the culinary delights of each country represented (from Germany to Azerbaijan, via Mexico!) while enjoying a concert. It was a very good time, people were able to share their personal experiences and discuss about mobility and cultural specificities.

On May the 9th we had a stand with different activities for children so that they could learn new things about Europe while having fun, with quizzes about flags, history, languages.
We continued with the inauguration of the Borderline exhibition by Valerio Vincenzo, who travelled the Europe roads for 5 years to take pictures of the borders of the European countries. These borders that have not always been synonym of peace, as Nawel Rafik Elmrini recalled in her speech.

So, in honor of this hard-won peace that we witnessed the symbolic flight of the doves… A moment that pleased everyone! Finally, we introduced the short movie of the Fabrique de l’e-citoyenneté : Vote et Espoir (Vote and Hope). The representatives through this video, have given young people the opportunity to express their hopes for the 2019 European elections. The video brought hope and highlighted an aspiration shared by all: the desire of a Europe more social.

continued with the activities of the 14th of May around the voting process and especially the online voting with the presentation of the VoteWatchEurope app. Created by a Brussels-based non-profit organization, it gives rapid access to voting and activity of Members of the European Parliament, to ensure a greater transparency in EU politics.

ON EUROPE’S BORDERS – 25TH MAY
A movie-debate was planned on the 25th of May at the CSC Hautepierre with the aim of presenting to young people the European and international mobilities proposed by our association. We started by informing young people about all the programs that enable them to travel around Europe or abroad, such as European Voluntary Service. A debate followed at the end of the broadcast as well as the testimonies of our speakers on their own experiences. Finally, we saw the film “nothing to declare”, which tells the story of two Belgian and French customs officers facing the disappearance of borders in 1993.

On the 31st of May there was a meeting with the European Youth Forum and the deputies of the European Parliament at the Lieu d’Europe. Nawel RAFIK-ELMRINI, the alderwomen of Strasbourg, opened the meeting with her welcoming speech.

Then, she gave to the deputies and the presidents of the forum a perfume called “Eau d’Europe” which was custom-made, according to the different scents of the European countries evoked by their inhabitants. Then the participants split up into groups and discussed on the subjects that had been prepared by the associations with the representatives of the European Youth Forum. The President of the Forum then expressed his willingness to work in collaboration with the various associations. The meeting ended with a conclusion on the activities and a presentation of the different activities prepared for EYE.

This European month ended with the big event on the 1st and the 2nd of June: the European Youth Event 2018 at the European Parliament. It represents a unique opportunity for young people to make their voices heard. Nearly 8,000 young people came to Strasbourg during this period. On this occasion we organized urban walks including two rout