I. Identity Card of the project 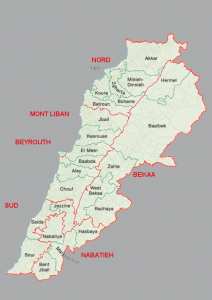 II. A few words of exchange

EU: Visa and passport with a minimum validity of six months. Short-stay visas have a duration of 90 days and are issued in the Embassy of Lebanon in Paris. For a single entry, the cost of the visa reaches 39 €. It is not obligatory to go to the consulate personally, to file the file or to recover the visa, a third person can do it for others.
The passport must be valid for 6 months after the end of the stay. An airline reservation is required to obtain the visa.
For more information, here is the website of the embassy: http://www.ambassadeliban.fr/visas.php

It is strongly advised:
– Update of diphtheria-tetanus-poliomyelitis vaccination.
– Other vaccinations recommended (according to hygienic conditions and length of stay): typhoid fever, viral hepatitis A and B.
– To follow strict hygiene rules, risk of coronaviruses, seasonal influenza and avian influenza.

– be careful with photography (ask the opinion of the people first)
– to monitor his behavior and to remain reserved in the expression of his ideas (moral, political, etc.).
– to penetrate barefoot in the mosques open to non-Muslims
– not to photograph the buildings, sites and checkpoints where soldiers or members of the security forces are stationed.
– be discreet when leaving or putting your wallet in public places
– wear appropriate clothing at a place of worship; In mosques, women must have their heads and arms covered.
– not to have a sign of affection in public towards a partner of the same sex
In the national security context, travel to border areas with Syria, Bekaa Plain, Southern Lebanon, the southern suburbs of Beirut and the outskirts of Tripoli is strongly discouraged.

This document contains information from the following sources: